How to Build a Brick wall Like a Professional 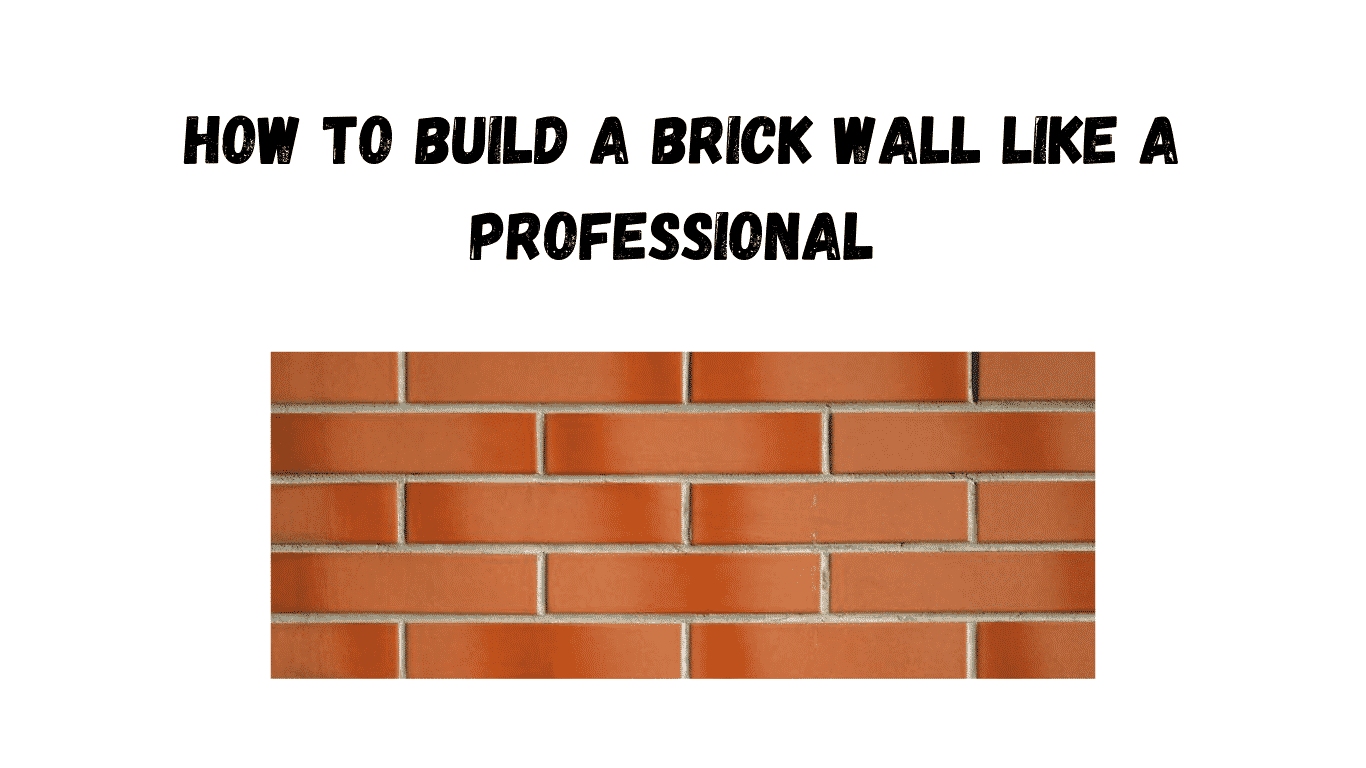 How to build a brick wall

How to build a brick wall can be challenging if you don’t know where to start and don’t know the proper construction methods involved.

In this guide, we are going to look at the different stages and processes of building a brick wall like a professional.

Bricklayers build walls day in day out, and as easy as it is to get a professional in, it is possible to do it yourself with the right know-how. Of course, this is not saying you will build the perfect brick wall straight away, but with a bit of practice, you could build a brick wall that serves that purpose.

Brick walls have been built for thousands of years, and it’s something you will see daily on your daily commute.

Lets look at how to build a brick wall like a professional.

How to Build a Brick Wall

When building a brick wall, preparation is key to having a smooth build process. First, make sure you have the tools and equipment needed.
To start, lay out the brick to the length of your wall. This is called a dry bond. It allows you to understand how many bricks you’re going to need and also understand the bond.

You can also measure the width of the wall and calculate the number of bricks. Finally, if it’s something tour not accustomed to, you can use a bricklayers gauge tape.

To lay the first course, spread a 12 to 15 mm bed of mortar just enough so you can set the brick on a 100 bed, tap the brick down softly, so the bed of mortar is 10 mm lay around 2 to three bricks and level with a spirit level.

Once done at one side of the wall, go to the other end and do the same, laying the bricks on a 10 mm bed of mortar and set level.
Next, use a bricklayers string line and pin it in on both sides of the wall.

Laying Bricks To a line

Lay the bricks to the line making sure you have 10mm joints. You can open and close them if needed or slightly shorten the wall, so 10mm joints are achieved.

Now the first course has been laid. Next, you can build both sides of the wall, which will enable you to attach corner blocks and a bricklayers string line.

Depending on what type of wall you are building, you can build brick pillars on both sides that will increase the strength of your wall.
As you build the corners or pillars, make sure to make your brickwork half bond and cut half bricks when needed.

When building the wall, make sure to build your corner three to five bricks higher at a time, then you can attach bricklayers corner blocks or pin into the brickwork and lay to the line.

When building pillars and corners, you will need half bricks in certain places.

To cut a brick correctly, lay the brick onto a good level surface and lay the brick on its side, use a bricklayers bolster and lump hammer, strike the bolster with the lump hammer. The brick should break, depending on the type of bricks being used. You can go around the brick hitting with softer strikes until the brick breaks, leaving a clean-cut half-brick.

Roll the cement on the board and turn until you have a good amount on the trowel to put onto the brickwork. The mortar on your trowel should resemble a pasty or a fat sausage, as seen in the photo.
Once on the wall, press the mortar into the top of the brickwork so it spreads evenly.

To spread the mortar correctly, Spread a cement bed around 15mm onto the brickwork, so there is enough cement mortar on the top of the brick to tap the new brick down to a 10mm Bed.

Once you have the mortar on the bed of the brickwork, you want to butter the perp of the brick, the joint. You can either do this two ways butter the brick in your hand and sit the brick into place or butter the remaining brick on the wall that the new brick will be pushed up to.

Sit the new brick into place and tap the brick down to the bricklayer’s line and up to the existing brick. If done correctly, the mortar bed and joint should be 10mm.

Once the brick has been laid cut the mortar off the brickwork with the trowel leaving a flush finish.

When the brick has been laid correctly, it is ready to be pointed.
There are many tools to point a brick wall, but it all depends on what finish is required.

Once the length of your wall has been understood, now’s time to start mixing the cement.
The typical mix for portland cement is around 4 to 1 or 5 to 1 depending on preference and bricks used, so that is four sand to every cement unit.
Ratio 4 to 1.

If mixing cement by hand.
Mix sand and cement to a ratio of 4 to 1, which works out at 8 to 2 and 12 to 3.
Mix it until it mixes to a consistent colour.
Once it has been mixed form a hole in the centre of the mound, it should look similar to a volcano, fill the top with water and mix, add more water if necessary until it is a lovely creamy colour and good workable consistency.

Standard brick sizes vary from 65 mm to 75 mm in height and around 100mm in length, but different countries have different model brick measurements and lengths.

See also  What are the Best Bricklayers Profiles?

“In the United States, current bricks are (managed by American Society for Testing and Materials approximately (203 × 92 × 57mm The most regularly used is the customizable brick having size (194 × 92 × 57 millimetres). This customizable brick of 7 5⁄8 with a 3⁄8 mortar joint facilitates the computation of the number of bricks in a particular course.” Source: Wikipedia

in Australia, the model brick size (or the operational size) is 76mm high, 230mm long and 110mm wide, according to the Australian Standard AS4455.

Some bricks are completed with diverse work dimensions. 50 mm and 90 mm high bricks, 90 mm broad bricks and 290 mm long bricks are utilized for various constructional and artistic effects. Larger bricks are regularly used for more inexpensive laying and as a style attribute either independently or with smaller bricks.

With mortar thickness, the measurement of the brick turns out to be 200 mm x 100 mm x 100 mm, which is also acknowledged as the official and nominal size of the modular brick.

The Main Types of Bricks

Common bricks are used for foundations. They are made from concrete and used for internal work or generally work that is not seen, usually, work that is Rendered cladded or underground.

Facing bricks are usually made from selected clays, and they are chosen for their appearance and performance to weather conditions.

Engineering bricks have a very high density and strength. They do not absorb moisture and are used on load-bearing walls and damp conditions such as inspection chambers, maintenance holes and work close to the ground.

If you want to calculate how many bricks you need use this handy brick calculator below.

Please allow an extra for any cutting and wastage, including any bricks that break. include an additional 5% allowance for 'wastage theres nothing worse than running out of bricks befor the job is finished.

How To Build a Dry Stone Wall